Born in the city of Lima, capital of the Republic of Peru, Ricardo Augusto Marticorena Roncagliolo comes from a family very involved in the area of business and investment, which served as inspiration for him to venture into this interesting world.

Graduated in Business Administration Ricardo obtained a lot of work experience working in different companies in his country of origin and also in the United States.

Today, Ricardo is the Manager of our practice located in the city of Charlotte in the state of North Carolina. 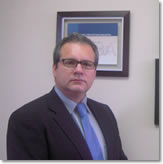