Sylvia was born and raised in Lima, Peru, she emigrated to the United States after graduating from the University of Lima, where she obtained her Bachelor of Laws. Sylvia is a licensed lawyer in her home country, specializing mainly in civil matters.

Sylvia decided to emigrate to the United States in 2002 and shortly after she began working in a law firm as a paralegal, she has been working as a legal assistant in the immigration area for more than 8 years, Sylvia has a vast experience in completing the USCIS, EOIR, and ICE forms, in addition to applications, including but not limited to family petitions, adjustment of status, U-Visas, Removal cancellation and various motions including motions to reopen or reconsider, consular processing and Exemptions and pardons of inadmissibility.

Today, Sylvia is in the process of being admitted to the Faculty of Law and pursuing her legal education and the recognition of her law degree in the United States. Sylvia is fully bilingual in Spanish and English and is also a Public Notary of the State of North Carolina. 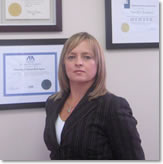