Susana Rocha, was born in La Guaira, Venezuela, the daughter of Portuguese parents who arrived there in search of prosperity after the aftermath of poverty that left the Second World War and in flight to the Dictatorial regime of Salazar-Portugal. She is characterized by a personality of foresight, serenity, breadth of vision and feelings of surrender to her neighbor.

He began his first studies in the Colegio San Vicente de Paul, College of Catholic parents, where he did all his primary and baccalaureate; One of the best Colleges of the State of Vargas, where they instilled very strong values, humanitarian and Catholic-Christian; Her continued search for equity and solidarity to the weaker prompted her to want to be a lawyer.

After graduating from Bachelor of Sciences, he immediately began his studies at the University where he began his law studies, which culminated in 2002 obtaining the title of Lawyer with only 22 years of age.

As he penetrated the knowledge of law, he was inclined to the criminal branch, he was passionate about the search for justice for the victims, he dreamed of a “true rehabilitation” of the victimizer and he longed for a safe environment for the citizen, that is how he entered the legal system Criminal acquiring his work experience in the Criminal area in the Criminal Judicial Circuit of the Metropolitan Area of ​​Caracas, Caracas Court House. Venezuela. Beginning at 20 years of age as Assistant of Court until arriving at the position of Secretary of Dispatch.

When Life suddenly offered him a different way and God blessed him.

Once settled in the United States and at the same time that they undertook their projects in this country, there remained latent in her the desire to Exercise the Profession of which she feels so proud to be part, nevertheless it was only until she had to fulfill certain stages as The plans of God that was part of this great team of Abg. Marcela C. Rodríguez ESQ., As Legal Assistant to the Lawyer, this time innovating in the matter of Immigration, a very humane matter that was perfectly suited to her quest for Social Justice and solidarity with her neighbor.

In short, Susana Rocha describes herself as a person who longs for a world of solidarity and justice, and considers that if life is a road to be traveled she will seek that Justice in “her duty” be the right way and embrace Justice As a lifestyle. 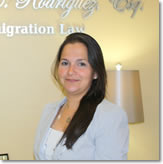