Natalia Durán is a strong, determined, and passionate young woman. But do not let your few 18 years of life deceive you; She is so prepared and educated. Since childhood Natalia has excelled in school, always pushing harder and doing the extra mile. During her second year in High School she decided to transfer to School for Advanced Studies. Here you were given the opportunity to attend at the same time, college classes in the morning and advanced placement classes in the afternoon. After two years biting her nails on each exam and sleepless nights, Natalia graduated. Not just once but twice! First in May, earning his Associate of Arts degree from Miami-Dade College and then in June, earning the Superintendent’s Distinguished Diploma as Cum Laude from his high school.

Natalia attributes both her academic and personal achievements to her parents and the migratory journey they spent. A trip that began when he was only three years during the violence of guerrilla, paramilitary and narco of Colombia. His family emigrated to the United States in the late 1990s, with the intention of building a home in Miami, Florida. In an effort to avoid becoming undocumented, his family did everything legally possible to reach the long-awaited residency. However, Natalia, her older sister, and her father unfortunately ran out of status. Although her mother was lucky enough to receive an M-1 Student Visa, this small ray of hope lasted only a year and the Duran family now ran out of options.

Thank God that was only for a brief time, since after nine years, the Family Petition I-130 was granted to his family, giving them a flash of hope again. The Duran family now had a better chance of completing the American Dream. In May 2013 her older sister is the first American citizen of her family. With the help of God, all family members are already finally on their way to becoming permanent residents or American citizens.

Natalia began her pre-professional practice with Marcela C. Rodríguez Esq. In July 2013 in order to gain experience in the profession of Lawyer. She also plans to continue her education at Florida International University, where she won a full scholarship. There he will strive to obtain a double “Bachelor” Diploma in finance and international business. All this in time, to finally reach her long-awaited dream, become a lawyer. 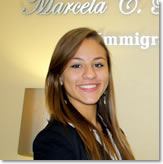